Alright, let’s say you’re going on a trip to Asia and plan on hitting 5 different countries. You know you’re gonna need to sort out a mobile connection to the local company in each new place.

But, imagine if you could simply get your local SIMs before you even start your trip? So that once you land you are automatically connected. Before you’ve even finished breakfast in your New York apartment, in 5 minutes you’ve sorted out mobile connectivity for your adventure to the East.

This is the aim of Airalo co-founder and Antler alumni, Bahadir Özdemir. He plans to turn the traditional roaming market completely on its head through new eSIM technology.

Bahadir stopped by the Antler Amsterdam office for a quick chat with our marketing manager Hayden on the state of eSIM technology and the challenges in being the trailblazer for this emerging space: 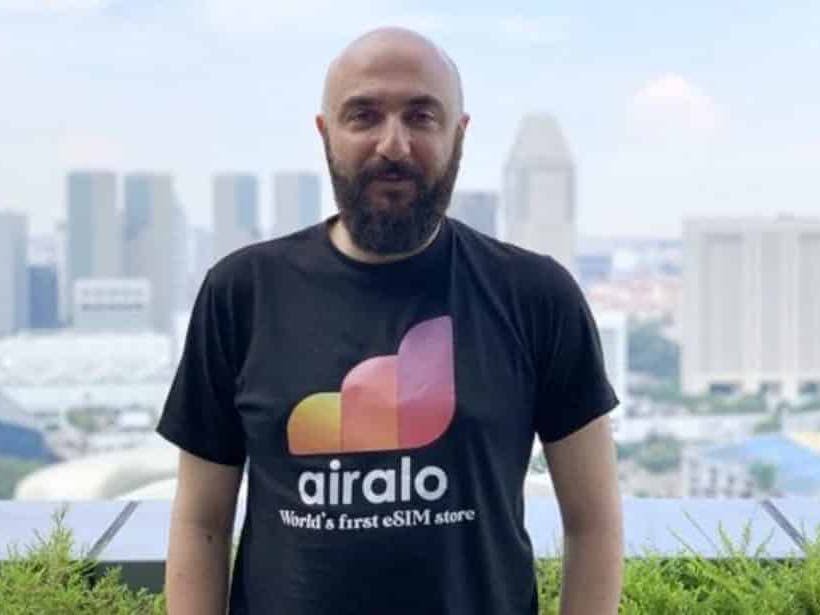 First things first, let’s clarify for those who don’t know as this is an emerging technology, what is an eSIM?

B: Right, eSIM technology is very new, and just to give you an idea how new: Apple just shipped the first eSIM compatible phones in September 2018. So, we couldn’t have started this store even if we wanted to one year ago because there were no devices, no phones or tablets that were compatible with these SIMs.

These eSIMs are basically tiny little chips that are even smaller than the nano SIM cards. New devices come manufactured with the eSIM already inside and they are simply the shell of the SIM card without the telco’s (mobile operator’s) profile.

From now on when you need to connect to a telco like Vodafone you're not going to buy a SIM card you will just download the operator's profile onto your phone.

You'll go to airalo.co, choose your operator, install the operator onto your phone and boom you’re done. It’s an amazing technology. It will logistically disrupt the whole scene because before operators had to deliver their SIM cards to thousands of points all around the world like retail stores and 7-11s but now everything is going to be digital. Like DVDs to Netflix, this is what’s happening with SIM cards.

OK, so given that this tech is so new, is there any competition in this space yet? Or is Airalo really leading the way?

B: We are leading the way, but we also think there might be different versions that come up. It’s important to understand that to create an eSIM store there are some aspects that need to be introduced:

Firstly, all the telcos need to be eSIM ready not just the devices, and there must be more devices in the market that are compatible. So we are kind of waiting for both to mature.

There are currently only 25 telcos around the world that are eSIM ready.

We have a hybrid store which is a little bit more complicated. We combine the telcos that are eSIM ready and we create our own local virtual network operators. I think if somebody wanted to do this right now they could probably cover only 20 to 25 countries, whereas through our platform, we have 113 local and 4 global eSIMs now.

A solid start then. When did you come up with this idea and what was the factor that made you realize it could work?

B: I’ve been in the telco space for the last two years, before this my venture was a global SIM card company for travellers. Like any other telco, I was distributing our SIM cards all over the world, which was logistically very challenging.

When the conversation around eSIMs started, as an entrepreneur selling regular SIMs for a living, I was kind of nervous and excited at the same time. So you can see the dilemma I had: I could ignore this shift and be like NOKIA who once upon a time said: “oh touch phones are just a phase.” before Apple came in and changed the game.

This was my first reaction, but I didn’t want to be a victim of ‘group think’ like NOKIA. I was sure that eSIMs would take off and that once all those major companies get eSIM ready my thought was: “how would you access those users?”

That’s when the idea came up. It’s a simple idea like Spotify or Netflix, somebody needs to aggregate all these eSIMs in one place.

Telcos are already saying that in 5 years we will not see the physical SIM card slot anymore. By 2022 there will be 800 million eSIM devices in the market.

From the marketing side of things then, how do you convey your brand to the average consumer who knows nothing about this new technology?

B: We are speaking to both the telcos and the traveller’s market right now. Travellers need a structured way to access these SIMs and on the other side, telcos need an efficient way to deliver them to their customers.

What you need to know is that 70% of travellers don’t activate a roaming plan until they arrive at their destination. In 2019 people are still afraid of overspending so they wait to land and then look for the local SIM card. We want to change this.

Right now I have four eSIMs from four different countries installed on my phone and that's simply beautiful. By the way, any eSIM compatible phone can do this with 50 eSIMs at the same time. So, if you're going on a long trip you can simply get all of them ahead.

50 different countries would be one amazing trip I would say.

B: Exactly right?? The beautiful part is you can just enjoy the connectivity and you don't need to deal with expensive charges. The old roaming solutions out there where you have 200 megabytes for 10, 15 or 20 dollars are no longer needed anymore. With local eSIMs I connect here in Netherlands just like the local Dutch guy does.

And for the telcos, again because the problem is two sided, they need a digital retail channel to deliver to the prepaid users and for the telcos that's what we are doing.

But are eSIMs really a selling point of new phones coming out? Is this something buyers are even aware of?

B: Not so much right now. It’s a chicken egg dilemma. The device makers are also expecting the telcos to be more ready so that it will make more sense because still in many countries people don't know what an eSIM is.

Let’s say you’re a device maker and you want to sell in Singapore. A lot of the Singapore telcos recently said there is no point in promoting the eSIM aspect of this, but, what we realized when we did our market research to gauge what people are expecting, there are millions of interested people out there and we had a load of sign ups in a couple of days. People who know that their phones are eSIM compatible are just curious how they will use them.

Telcos are already saying that in 5 years we will not see the physical SIM card slot anymore. By 2022 there will be 800 million eSIM devices in the market.

Clearly there’s a market. But before we go, I’d like to ask what brought you to the Antler program and how did it help you find the right person to be your co-founder?

B: We met some amazing founders which I still wish could be in our team but eventually we were two people who got excited by this project.

You know, I remember one of the cohort members saying to me after I finished my first pitch to the cohort, she said: “How do you get people excited over SIM cards? That doesn't even make sense!” because my pitch was kind of funny and kind of emotional.

So the Antler program helps you really zero in on the right people and weed out those who aren’t interested from early on. It’s not always easy to ask the guy who just quit Google to come join your small idea but the Antler program provides a platform that assists with that to really meet exceptional people.

Airalo, the world’s first eSIM store is open now. Get your very first eSIM for that next big trip here.